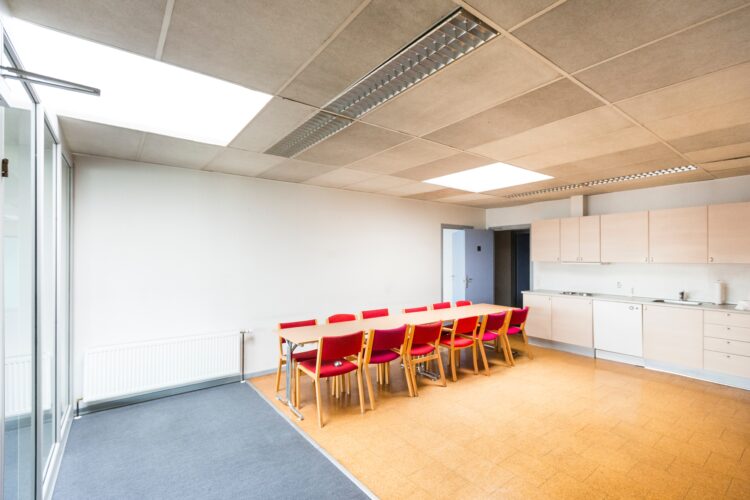 A suspended ceiling isn’t complicated; the name pretty much says it all. It is a plaster ceiling, or ceiling made from another material,  that is fitted beneath your building’s structural ceiling.

A suspended ceiling can work well in spaces where high ceilings are not required and can act as cover for lighting, wiring, or ventilation systems as well as helping to create consistent décor in a room that may otherwise have intrusive features either practically or aesthetically.

There are three major types of suspended ceiling and at SLP interiors we have over 30 years of combined experience in doing commercial fit-outs using all three.

What are the types of suspended ceilings?

The most common type of suspended ceiling is the lay-in ceiling. In a lot of buildings the original ceiling can be too high for commercial use, or would it would be unattractive or hazardous to have the necessary lighting, ventilation, or other electrical systems wired elsewhere. It is in these instances that a suspended ceiling is required to create the necessary space. The lay-in ceiling functions by using either a 600mm x 600mm or 1200mm x 600mm metal grid, which holds the suspended ceiling tiles in place. A variety of ceiling tiles are available to suit the needs of any space.

Clip-in ceilings are typically installed in spaces where a visible grid would be unideal or when access to the void between the suspended ceiling and the building’s original ceiling is going to be unnecessary or limited. Rather than a plaster ceiling, clip-in ceilings use metal tiles that are clipped into an invisible T-bar structure. The metal tiles are available in a range of colours and finishes.

An M-F, or metal frame, suspended ceiling consists of a metal framework with plasterboard either taped and filled or skim plastered to the underside to create the appearance of a flat and consistent plaster ceiling. An M-F suspended ceiling is practically similar to a clip-in ceiling in terms of there being reduced access to the space between the original ceiling and the new plaster ceiling, but are wildly different in installation and appearance. Due to the specific installation of an m-f suspended ceiling, they are more permanent and more arduous to take apart than the other kinds of plaster ceiling, so it is important to take extra consideration when choosing one.

What should I consider in choosing suspended ceilings?

If you are unsure then we at SLP Interiors are always happy to help not just install, but also help you choose and plan what kind of suspended ceiling would work best for you. Fill in our contact form or contact us directly via telephone or email if you have any enquiries or wish to discuss a potential commercial fit-out. Also, feel free to take a look at our previous projects to get an idea of the sort of high-quality work to expect.